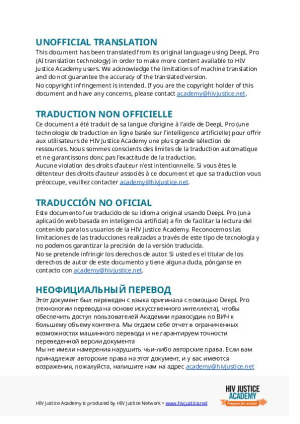 INJURY. Transmission of HIV in cases in which the infected person knew of his partner’s disease. The complainant knew that her partner was a carrier of HIV, so having agreed to have sex with him, without any kind of prophylaxis, the transmission of the disease is not worthy of criminal reproach. External evidence of the disease that the complainant had to perceive, since she herself was diagnosed months later, and neither after this diagnosis, nor when she denounced an alleged aggression, did she make any allusion to the contagion of the disease. In dubio pro reo. Self endangerment of the complainant herself.

The SC dismissed the appeal filed against the sentence of the AP Madrid and confirmed the conviction for the crime of aggravated injury due to HIV infection.

This document has been translated from its original language using DeepL Pro (AI translation technology) in order to make more content available to HIV Justice Academy users. We acknowledge the limitations of machine translation and do not guarantee the accuracy of the translated version.