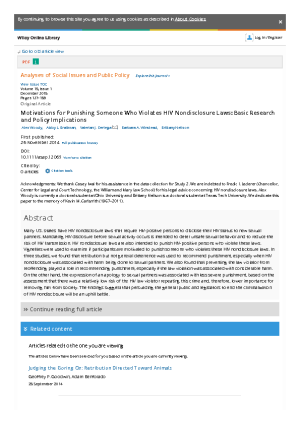 Suggests the general public is likely to endorse HIV criminalisation as fair and credible if used to punish actions that cause considerable harm. While it may not be possible to gain public support for a sweeping elimination of HIV criminalisation laws, a realistic advocacy agenda may involve arguments for limiting statutes and prosecutions to egregious cases where considerable harm is caused.

Author
A. Woody, A. Braitman, V. Derlega, B. Winstead, B. Neilson