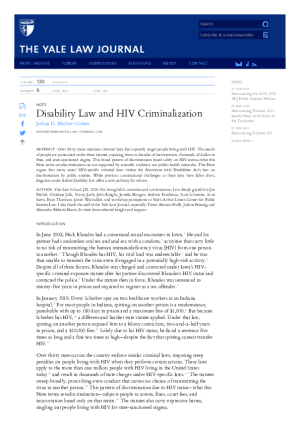 Over thirty states maintain criminal laws that expressly target people living with HIV. Thousands of people are prosecuted under these statutes, exposing them to decades of incarceration, thousands of dollars in fines, and state-sanctioned stigma. This broad pattern of discrimination based solely on HIV status is not supported by scientific evidence nor public-health rationales. This Note argues that many states’ HIV-specific criminal laws violate the Americans with Disabilities Act’s ban on discrimination by public entities.