In 2018-2019 the European HIV Legal Forum conducted a project on HIV-criminalization in 10 EU Member States (Austria, Czechia, Finland, Germany, Greece, Ireland, Italy, Portugal, Romania, and the United Kingdom). The project produced a comparative legal report based on legal survey launched in the 10 countries. One of the main findings of the project showed that regardless of scientific advance in understanding the risk of HIV infection, there is a gap between the scientific knowledge and the understanding of judges, prosecutors and police of the issue due to lack of trainings and national guidelines and media still plays an important but negative role in shaping the discussion around HIV-criminalisation thus sustaining and increasing the stigma against people living with HIV. The report also shows that HIV-criminalisation disproportionately affects key populations,  women, people of colour, and the poor and homeless.

This paper, prepared by Moono Nyambe at GNP+, and managed by Julian Hows (GNP+) and Lisa Power (Terrence Higgins Trust) comprised a synthesis of input from several different sources, pubished in April 2005 as a draft document open to comments. The statements and information provided in this document are based on replies to a questionnaire and have not been independently confirmed. The views expressed in this document do not necessarily reflect the official position of UNAIDS which partly funded its production.

Respondents from 41 out of 45 countries provided information for the study. Of the respondents from the 41 countries that were able to provide information, it was reported that in at least 36 countries the actual or potential transmission of HIV can constitute a criminal offence. This supported anecdotal evidence that increasingly the law is seen as a tool for regulating conduct that can lead to HIV transmission. In 21 of these countries, it was reported that at least one person has been prosecuted. 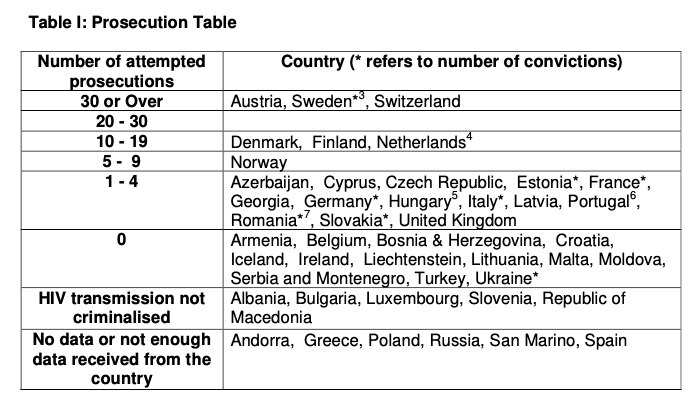 This EU-funded project on improving access to testing and treatment continuum includes some detailed and informative HIV criminalisation case studies (Netherlands, Denmark and England & Wales) as well as nine advocacy tip sheets such as ‘Simple principles for effective campaigning’, ‘Getting the evidence for policy changes’ and ‘What can we do when politicians ignore the evidence?’