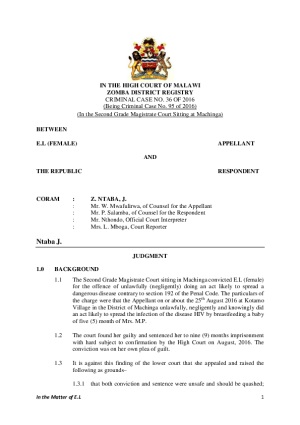 On 19 January 2017, the Zomba High Court in Malawi delivered a landmark ruling on the application of criminal law to cases of HIV transmission and exposure through breastfeeding.

The appellant was a woman living with HIV who was convicted of negligently and recklessly doing an act which is “likely to spread the infection of any disease which is dangerous to life” under section 192 of the Malawi Penal Code for accidentally breastfeeding another person’s child. She was unrepresented at her trial and sentenced to nine months’ imprisonment.

Before the High Court, she appealed her conviction and sentence and challenged the constitutionality of section 192 of the Penal Code for being vague and overbroad. She raised expert evidence to show the “infinitesimally small risk” of HIV transmission by women on antiretroviral treatment through breastfeeding. The State agreed that the appellant’s conviction and sentence should be overturned and set aside.

At the hearing on 2 December 2016, the Court, per Ntaba J, granted an order that the appellant’s identity be concealed to protect her confidentiality and that of the children concerned.

On 19 January 2017, the High Court acquitted the appellant and ordered her immediate release. It held that the proceedings in the trial court were irregular and “blatantly bias” against the appellant, compromising her right to a fair trial. The Court held that the appellant did not have the requisite knowledge or belief that breastfeeding the complainant’s child was likely to spread HIV and cautioned against the misapplication of criminal law in cases of HIV transmission and exposure. The Court recommended the constitutional challenge be filed for separate determination considering the national interest in the issue.

The appellant was represented by Mr Wesley Mwafulirwa of John Tennyson Associates.

Alternative links
HJN feature on the impact of this case, SALC resources on this case 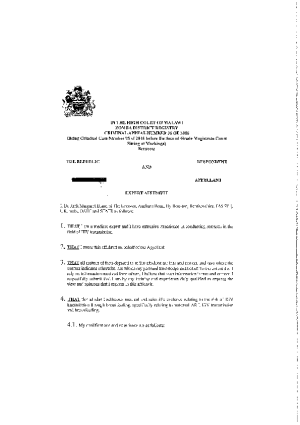 Affidavit provided to the High Court from Dr Ruth M Bland, a medical expert with extensive expertise in conducting research in the field of HIV transmission, concluding that in her expert opinion in the case of E.L. the risk of HIV transmission to the child after a single exposure of breast milk whilst on ART is “infinitesimally small”. 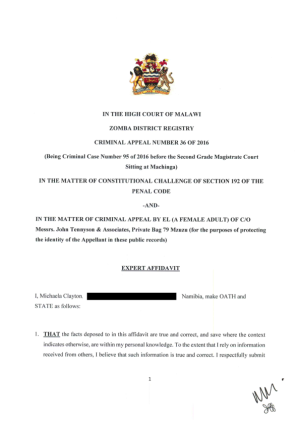 Affidavit provided to the High Court from Michaela Clayton, a human rights lawyer with extensive expertise in HIV/AIDS and human rights issues, concluding that, in her expert opinion, HIV criminalisation was unlikely to prevent new infections or reduce women’s vulnerability to HIV but could in fact harm women rather than assist them, and also may negatively impact both public health and human rights.

Judge Charles Hungwe’s reasoning that allowed the appeal on behalf of a 26 year old woman, was charged with the crime of deliberate transmission of human immunodeficiency virus (“HIV”) as defined in s 79 (1) (a) of the Criminal Law Code for briefly mistakenly breastfeeding another woman’s baby.

The judgement found that the prosecution was “ill-conceived as the legislature did not intend that breast-feeding by infected but ignorant women be criminalised. In any event there was no proof that the appellant fully appreciated that her conduct would result in HIV transmission. In the result she was entitled to an acquittal at her trial.”